skip to main | skip to sidebar

I am pathetic at updating this. I think I shall dump it. There is no point. I put short updates on my FB. That's enough for me these days. Plus even when I want to have a whinge, by the time I get to a PC I have forgotten.

Before I go, I have a few things to write about;

Just back from a well earned break and was happy and good and loved all again. For one day. Today, third day back from break, I'm ready to slap people again. How are people so bloody stupid. Last time I pointed out who I was whinging about, I got burned and completely shut down my blog. So even with me dumping this, I won't name names. I am over it though. Ready to chuck my job, sell the house and move interstate to country (insert other state here). Anywhere.

Melbourne drivers are incredibly inconsiderate. They just don't give a hoot. And I'm over it. So many people are above the law, and think they are more important than anyone else on the road. Yunno, the road was built from point a to point b and you are NOT the only person travelling between these two points. Yes, that red light means stop. Not just for me, but for everyone facing it. Lines on the road? Yup, there for a reason, stay on the side of yours you idiot. Oh wow, you have a 4WD, how fabulously expensive for you, how about you turn your headlights off while sitting behind me in my regular height sedan? Oh and my current fave? No, while you are on the freeway, you can't merge left onto the on ramp then merge back into the left lane further up. This is ILLEGAL you dickhead.

16 yo Jessica Watson. Love her. She is 16 and got off her butt and did something incredible. I don't care if it doesn't fit the bill for a record. She is amazing.

Bulldogs - disapointed you are 5 and 3. Should be better than that. Then again, you are 4th on the ladder this week, so I should be happier.

T and kids - love you all. You know this and don't need me to write about it here. Esp when I could be doing stuff with you instead of sitting at a PC telling the world how wonderful you are.

World, if you know me and are my friend on FB, I'll catch you there. Otherwise, Adios!

Well between my birthday and now, there have been quite a few things happen:

Hmmm... I think that is me up-to-date, not unless you want the boring bits as well. Will try to do more often in future! 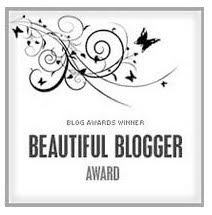 The sweetest chick has nominated me for the Beautiful Blogger Award


3. Link to the person who nominated me for this award - Done above.

So, 7 interesting things about me.... gawd, don't think there ARE 7 interesting things.... here goes:
1. At the age of 38 I *still* don't know what I want to do when I grow up.
2. I can play the saxophone, having learnt clarinet and flute in high school.
3. I love to research things. I have people get in contact with me just to have me find an answer to questions they have.
4. I can touch my nose with my tongue. Apparently this is why he married me (joke joyce).
5. If I were younger, I'd be a surrogate for someone. Yes, it was that easy for me to be pregnant. And yeah, I still would now if it weren't so frowned upon for someone so 'old'.
6. I want to learn how to purl. Can knit, but not purl.
7. I now live by the 'if you don't ask you don't know' credo, and this works for most situations/thoughts. Eg, if you want something, ask for it, irrespective if that want is information, furniture, a discount, etc...

Happy Birthday to Me!

A little different today. I'm having a wonderful day. A wake up SMS at my birthtime (thanks Ma!), more SMS's, as well as emails, phone calls and FB hellos. A stack of gorgeous pressies from hubby (yes, I know, they were from the kids... right!!!) and some handmade cards from the four sweethearts. Lunch with hubby and 3 of the short ones, come back to the office and my boss has bought me flowers. I was given a gift from my Mum via hubby at lunch, so have opened more gifty goodness.

I'm waiting for someone to come into the office and notice the flowers, so I can smile and tell them it's my special day :) I'm enjoying this and it's SOOOO unlike me. Love it!
Posted by Raelene at 11.2.10 4 comments:

Reading a crafty blog today (link to specific post) I've just thought of a good idea for a small handmade Xmas gift. Melissa is making these great handmade wash cloths. Very clever. I'm thinking to do same, but in a pocket style, so you can slip your soap inside the wash cloth to use it.
What do you reckon? Feels more like a female type gift. Maybe one of these with some really nice soap? Hmmm... Thinking cap back on.
I recently came up with another nifty idea, combining knitting and ipods. I'm yet to make more than one, so I'll try and get knitting a few more, then post about that and see what you think about it - I'd like to know if you'd use it and such. Just out of interest :)
Posted by Raelene at 7.2.10 2 comments:

I find when talking about the children we have, that I'm often apologising. Well, maybe apologising is the wrong word; maybe it's more 'explaining'. You see, we have four children. Yes, in this day and age, that is generally considered more than the norm. Let's face it, anyone on the telly with more than the average 2.4 children gets barked "buy a bloody telly!" by yours truly. Tongue in cheek and cheeky grin in place of course.
I always wanted three kids. You buy a station wagon/family car, there are five seats; one for Mum, one for Dad and three for the kids. Three seemed a good number.
I met my husband, he wanted two kids, stated, "we already have one with your eldest, now we just need one more". Yes, several girlfriends swooned at this (I can't tell you how many times I heard; Oh he's a keeper!) He knew I wanted three in total. Then I had one more, my second, his first, and he agreed with me and wanted another.
We thought we'd go for number three, but the month he knocked me up my womb was having a two for one deal and we got twins. That changed the dynamic of our lives.
We sold the station wagon and bought a people mover. Thoughts of one child in school and two in child care while we both worked went out the window; who the heck can afford three in child care? If we both continued to work full time, after paying for child care, hubby darling would walk out of work with just $15 cash! That ain't gonna pay the rent kids! Our rental situation went out the window and we started to consider seriously the possibility of buying or building our own home.
All of these things that were never considered all came into play.
So let me just say, when someone asks about my family situation, and I admit to the four children, once my conversation partner stops gasping for air, I then point out that the third child turned out to be twins and it wasn't on purpose and yadda yadda yadda. And at the same time, I feel that I'm apologising for the fact that I have one more child than I expected.
And through the apologies and explanations, right now, I have to admit I wouldn't change that number for the world.
Posted by Raelene at 16.1.10 4 comments:

According to a work colleague, the bloke driving her back to work last week after a meeting, came over the Swan st bridge in the right lane. When he merged into the left lane, he was subsequently pulled over when through the intersection and fined. There is a solid white line over the bridge.

Good I say. I hate being one of the sheep in the left lane the whole way, sometimes in 10 minutes of traffic (might not seem a long time, but when you are just sitting there, it's an absolute age) and have people constantly push in to the left lane ahead of you and through the green light, leaving you to stop at the red light behind them. Ugh.

Don't know how often police are sitting and watching, but to me, it's not worth the fine to try and push in. I'm going to stick in the left lane and avoid the fine.
Posted by Raelene at 21.12.09 2 comments: